The Dehcho Assembly and Resolutions from 2015

At the Assembly direction is given to the leadership on any number of issues as well as direction on the Dehcho Process. Over the last twenty years there are a large number of resolutions of the people that I, as the new Chief Negotiator, am becoming familiar with in order to carry out the direction of the people at the negotiating table.

Last summer there were three resolutions that were passed to add to the many from previous years to direct the work of the negotiations team. In 2015 there was a resolution in Fort Simpson which acknowledged that the Dehcho Process is continuing, further that as the Chief Negotiator had provided their full report for the prior year, the Assembly of the Dehcho First Nation supported the negotiations team in applying for some federal government money, called Negotiation Preparedness, to assist in continuing the Dehcho Process.

That funding is a grant, it is not repayable (so there will not be a big “loan” to pay back to the Government of Canada some day) and it is applied for every year. It’s a rather small amount but it helps fund the negotiating process.

Another resolution from last summer’s Assembly was regarding the work that was expected of the Dehcho leadership through the months following the Assembly. The leadership was directed by the Assembly to ensure there was a fall leadership meeting that included Elders, Youth, the leadership generally, as well as general members or citizens, to review, analyze, reflect and strategize on the current agreements that are in place, the land use plan that is in place, and to provide direction in regards to the Dehcho Process.

We are at a stage right now where the results of that workshop are being documented by the facilitator and being reviewed internally by my team and eventually in the near future by the Dehcho leadership. They will provide guidance going forward into the spring leadership meeting and into the 2016 Dehcho Assembly, for consideration and potentially ratification this summer. 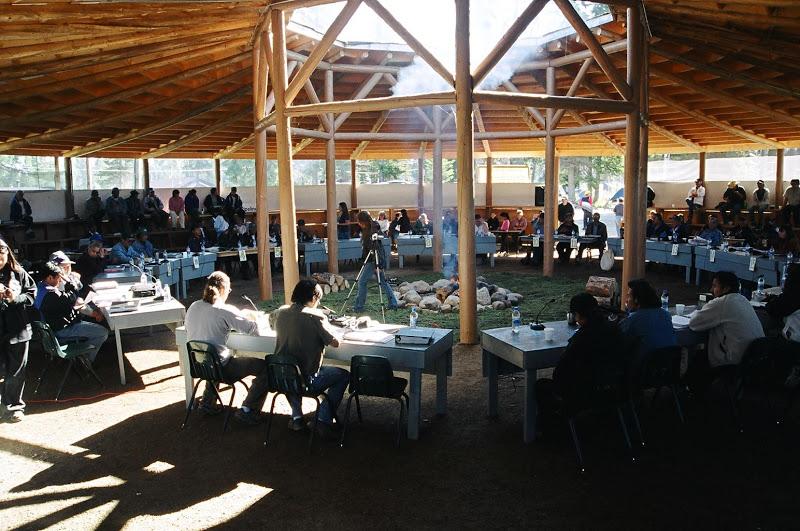 A photo from the Dehcho Assembly where all decisions about the Dehcho Process are made. Photo credit NWT Protected Areas Strategy.

On February 22nd, Dehcho Grand Chief Herb Norwegian and myself met with NWT Premier Bob McLeod for an official introduction.

The delegates at the Strategic and Tactical Planning Workshop in Fort Simpson earlier in February felt that such an introduction would be a good idea. No negotiation took place in the meeting, rather just a good general discussion and meet and greet.

All decisions about the Dehcho Process come from beneficiaries at the Annual Assembly. From time to time throughout the year, in workshops and leadership meetings minor adjustments to the negotiating process may be made. However, it is clear to all involved that it is the people of the Dehcho, in Assembly, who are in charge of the Dehcho Process.

In addition to the introduction, the Grand Chief asked the Premier about his commitment during the recent Territorial election in regards to a new GNWT offer to the Dehcho. The Premier did acknowledge that the government’s new offer would be out within a short time. Mr. Gary Bohnet, Principal Secretary who was in the meeting confirmed that this was being developed.

There was then some general discussion about how Prime Minister Trudeau is interested in addressing many issues relating to Aboriginal people in the country. It was agreed that Mr. Trudeau had a good helper in his caucus on the Dehcho Process in that our MP, Michael McLeod, is from the Dehcho.

The Grand Chief was able to tell a couple of personal anecdotes about work he has done in the past with Prime Minister Justin Trudeau, including the expansion of Nahanni National Park and on water issues. Herb told us about how a few years ago he drove Margaret Trudeau around Fort Simpson for a tour of the community, and she told him that she had worked on the issue of access to clean and potable water in remote parts of Africa. It is, as is often said, a small world indeed.

Students from Fort Providence and Fort Simpson attended a strategic and tactical planning workshop on the Dehcho Process in Fort Simpson February 9 – 11, 2016. In addition, individual youth attended along with the member organizations of each Dehcho community. The youth were there observing for the most part, though we certainly encouraged and did hear from them. There was a good presentation from the students about what they are thinking about the Dehcho Process.

There’s a very old idea, and it’s a very valid one, that the youth are the next generation of leaders. We need these young people to be fully aware of what’s going on today, to inspire them to find summer jobs and indeed full time work with the First Nations in the region. We all share in the responsibility to encourage and interest them in continuing their education, to become lawyers, social workers, and all sorts of other important jobs for them to become leaders. We need them to be involved in the land claim and self-government process, to actually being in control. We need these young people to become the next generation of Chiefs and Metis Local presidents.

Young people who want to stay up to date should spend as much time as they can on the Dehcho First Nation website. The website is extensive, is being updated now and will be relaunched soon to make it even more accessible. It is a huge resource with an immense amount of information on there. As we move forward, you can expect regular updates from me as well. We need to make sure that local Dene and Métis are hearing about the process as it unfolds. I look forward to working with people of many generations as we move forward.